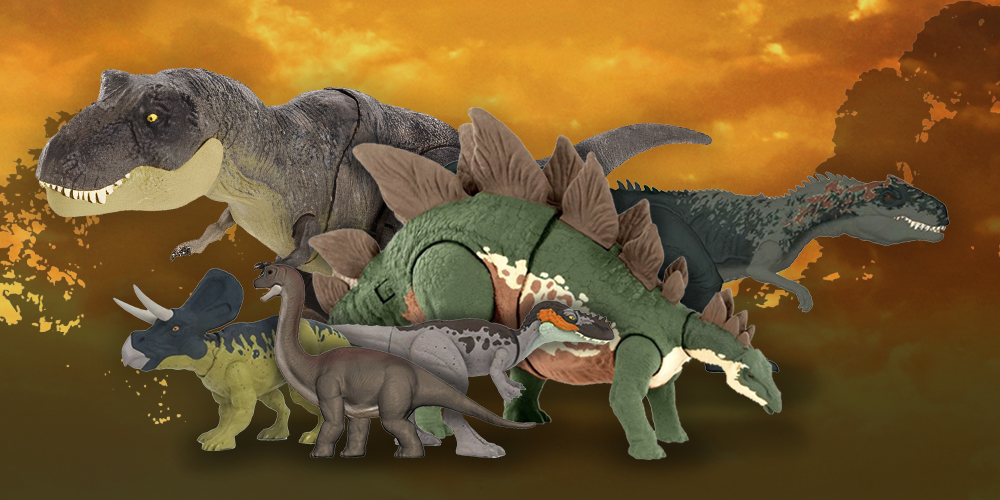 We’re just a month into the New Year, and already we have had non-stop Jurassic news to get us excited for another year of great content. Camp Cretaceous Season 2 released last week, and now, we have a look at some of the latest Mattel toys which will be hitting shelves in coming weeks and months – including some inspired by the second season of the show.  As it stands right now, we are unsure if these will be new assortments or old assortments, but they are likely to be under the new Dino Escape Moniker. We also do want to note that these figures do appear to be in various stages of development – so it is possible that some may not debut until much later into 2021. 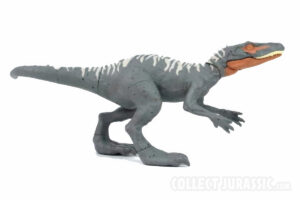 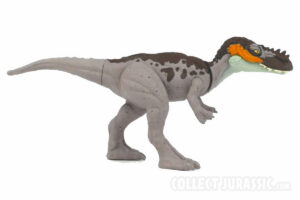 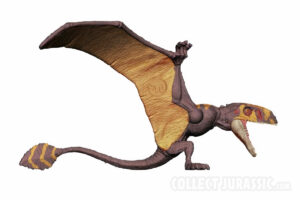 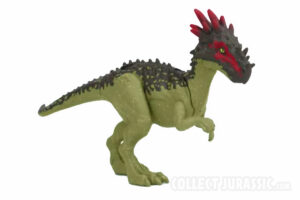 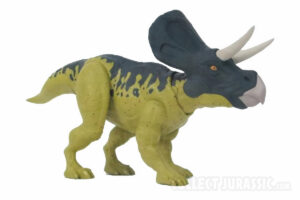 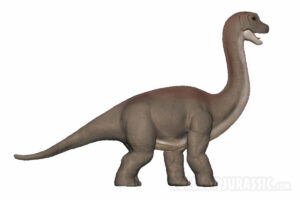 Up first we have the smaller, attack-pack style items. Whilst we are unsure if there will be a new naming provision here, we do know that these figures should continue to be available at around the $7.99 price point. Starting with the repaints, we have a few fan favourites here – including the Herrerasaurus, a figure which we last saw as a part of the first wave of Primal Attack figures to debut at the end of 2019. The repaint is pretty interesting here – with a grey base figure alongside white and orange highlights. Whilst the highlights could look better, in my opinion, the figure is by no means a bad one. Another popular sculpt is introduced in its first ever repaint here – with the Alioramus, a surprise hit from later in 2020, getting a light grey and brown repaint with some interesting orange and teal/mint green highlights. Whilst I definitely think the first version of the Alioramus looks more natural, this variant is definitely different enough to justify its own space in the line.

We then have two more repaints – including the Dimorphodon, which comes in a nice purple, yellow and red colour scheme complete with some nice paint apps on the tail, and we also get a repaint of the Dracorex – with some really unique red highlights on the head which pop when compared to the darker core colours which adorn the body of this figure. We also do have a couple of new sculpts here – the first of which is a brand-new, smaller-scale Ceratopsian, the Zuniceratops. The Zuniceratops has a pretty decent colour scheme – with the dark blue highlights looking pretty nice, but we aren’t quite convinced that this figure will work at the smaller scale, so would be interested to see what other people think of this one. The highlight, however, has to be the Baby Brachiosaurus – which perfectly matches up to the colour scheme of the larger Legacy Collection Brachiosaurus. This figure is absolutely adorable and is one which is likely to be a hit with fans who have wanted juvenile figures to be added to the line for some time. We certainly wouldn’t complain about this figure being repurposed in a Petting Zoo playset further down the line! 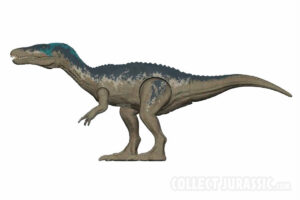 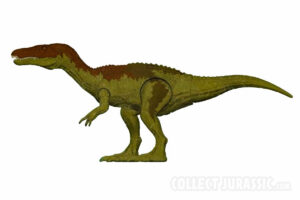 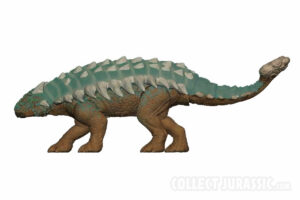 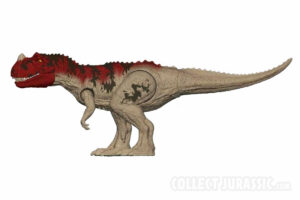 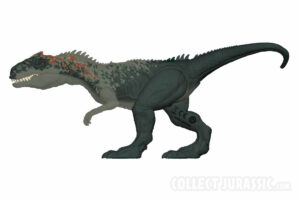 The Sound-Strike size medium dinosaurs will also continue to see releases throughout 2021 – with this platform clearly used as a medium to explore more of the dinosaurs from Camp Cretaceous, although a couple of surprises do make it in, too. We have Chaos and Limbo here – the two other Baryonyx which go with Grim to create the trio we will see in the second season of the show. These figures look nice, although we think it is safe to assume that they are repaints of the Grim sculpt. We would argue that they have slightly more appeal here, however, since they are named dinosaurs – and ones we really want to own.

Moving on from the Baryonyx we have three other dinosaurs which may use new sculpting given the fact that they have not been a part of the Sound Strike line before. The first is a gorgeous Ankylosaurus in colours which are very similar to the first roarivore version we got. This figure is definitely a new sculpt as the tail is different to prior versions of the Ankylosaurus we have received – so I am excited to see how the new play feature may function here. We also have a brand new Ceratosaurus here, which, again, appears to use a new mould as opposed to using the Roarivore mould. The Ceratosaurus appears prominently in the Camp Cretaceous Season 2 trailer, and this version chooses to re-work the JPIII deco which we have seen in some footage for the show. It is exciting to think this figure may improve upon the Roarivore version – taking the same deco and applying it to a figure which is more robust and can therefore stand better.

Lastly, but certainly not least, we have a brand new version of the Allosaurus – an animal which we last saw when it was released to oppose the Nasutoceratops in the Battle at Big Rock line. The new version of this figure appears to be a complete rework, with a more pronounced neck and jawline, as well as a better centre of gravity to hopefully balance the figure better. There are some similarities with the BABR sculpt we have seen, but we are hoping that it will be more a newer figure than anything as the BABR figure, much like the previous Ceratosaurus, can have some problems keeping its balance. It appears as though Mattel may be using this year lull before Dominion to revisit some figures which initially released with some problems – something which we would be really receptive to as it highlights they have listened to fans and addressed the figures which have experienced problems in the past. 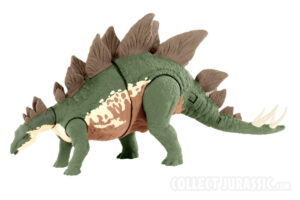 Another dinosaur making a refreshed return in the 2021 is the Stegosaurus – which will be coming in the Mega Destroyers variety. This looks like a spiritual successor to the popular ‘Mega Biters’ assortment from 2020, and the Stegosaurus in question comes with a really unique colour scheme – including dark green, cream, light brown and dark brown. I like how this is another example of Mattel using more naturalistic patterns which merge into the figure’s paint palette – with almost camouflage-esque paint applications helping to break up sharp angles and make this figure feel much more grounded within the natural world. Whilst the figure appears to reuse a few elements from existing Stegosaurus figures, the body itself looks new – with a large joint in the middle of the figure adding more articulation then has been present in previous iterations of the dino. 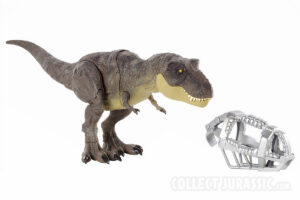 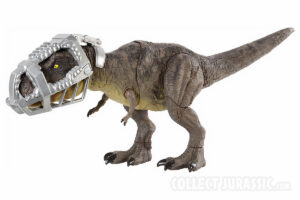 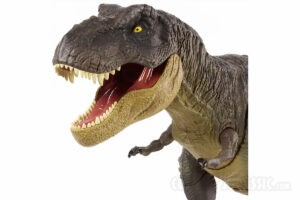 Lastly, but by no means least, is a figure which singlehandedly shows that Mattel do hear our feedback – as we have a full scale Tyrannosaurus Rex figure which includes Capture Gear alongside the figure itself.

Capture Gear is something which was popular in the original Jurassic Park toylines which were released by Kenner, and is something which modern Jurassic fans have clamoured for ever since the inception of the new line back in 2018. The new Rex hopefully sets an exciting president for this gear in the future – appearing to include a neck and back brace which will enable fans to ‘capture’ this figure. Of course, you cannot capture an animal without human characters to track it down and do so – so hopefully additional human figures may not be too far away, either.

The Rex itself looks nice to. This appears to be another variant of the film and Camp Cretaceous rex, although this one relies more on some darker tons on the back and head highlights, with some lighter tones for the underjaw and belly. I think the Epic Roarin Rex will be hard to top but this one does take an interesting step in a different direction when it comes to the colour palette. Also of note is the fact that this figure has a knee joint – suggesting that this may be more articulated then figures we have received in the past, and adding more value to this as another Rex in a line which is already filled with them.

We’re sure even more toys will be revealed in the coming weeks and months – but, for now, it looks like the Jurassic line is off to a strong start in 2021 – even if it is slightly repaint heavy. As always, we love to hear from you – so do leave your comments down below, and let us know what you’re hoping to see in later 2021 and beyond!