No matter what fandom you are a part of, you will probably find that February tends to be a time when things begin to get exciting. February marks New York Toy Fair (referred to herein as NYTF), which is a show where all the latest brands and companies come together to showcase their newest products to prospective retailers, and the media. This year, Collect Jurassic could attend the event as members of the media – meaning that we were able to gain access to some of the hottest new Jurassic World products which Universal and their partners have been hard at work creating.

In today’s write-up, we will look at the Jurassic World showcase which Universal invited us to on the Friday of the show. This showcase was heavily themed around the upcoming Camp Cretaceous, and gave us a tantalising taste of the products to come when the show debuts on Netflix this August. 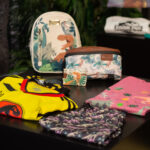 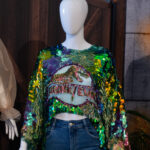 The first thing on show at the Universal event was a plethora of brand-new, Jurassic-themed apparel which individuals will be able to get their hands on. A range of unique merchandise was on show at the booth – including everything from branded T-Shirts and Bags to more unique items. Whilst a large chunk of the designs which are available embrace the current-day ‘Jurassic World’ moniker, many of the designs also embrace a more retro and nostalgic feel – embracing the more traditional ‘Jurassic Park’ logos and designs from the franchise’s routes. It’s safe to say that, regardless of which you prefer, there will be something for everyone as general merchandise and apparel continues to be released around the Jurassic brand throughout 2020 and beyond. 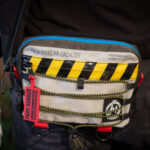 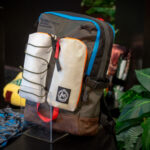 Other items which were on show were those from the LEGO team – who highlighted both their large direct-to-consumer set, Jurassic Park: T-Rex Rampage, and their smaller Legends of Isla Nublar sets. Whilst speculation is rife about newer LEGO sets coming for the line, there was nothing on show at this event – and so it is therefore safe to say that if these sets are coming, they may be due a little further in the future. With that said, it was nice to see LEGO continuing to maintain their association with the Jurassic brand, as the change to continued support with both products and extended media has been very popular with many Jurassic fans and is something which I am sure many want to see continue. 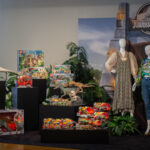 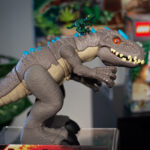 Additional items highlighted by the Universal team were some of the Fisher Price products which are currently available – allowing younger fans of Dinosaurs to step-into the world of Jurassic with items which are more accessible. We must admit – we are big fans of some of the cages and other play features with these products, and hope that they may inspire some similar playset-style products from companies like Mattel soon. Additional things to note included the more in-depth review of the Funkoverse strategy game – something which we are sure will be popular with collectors who were fans of the original Funko line. It is also great to see the relationship with Funko continuing, as this may be indicative of a continued relationship between Universal and Funko as we approach Jurassic World 3. Before we touch on Mattel, which we know you will all be dying to hear about, there was also the debut of a brand-new book from Scholastic – known as the Jurassic World Dino Tracker book. This book is scheduled to release on the 1st of September – and should be available anywhere where you like to purchase your books. 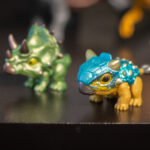 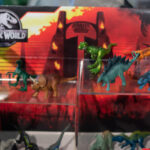 There was lots on show from Mattel at the initial event – with Universal clearly continuing to value Mattel as one of their strongest brand partners. Starting with the smallest figures first, we saw the debut of several brand-new Snap Squad figures. These include the Mosasaurus (a re-package who has already begun to pop up in some stores in some countries) and the Triceratops, who is a brand-new dinosaur which is joining the rapidly expanding assortment of different Snap Squad figures which are available. It gets more exciting, however, with the debut of two brand-new named characters from Camp Cretaceous. The first dinosaur we have is Bumpy – a Baby Ankylosaurus who is set to play an important role in the upcoming show. This dinosaur is adorable – and it isn’t the only variant of this figure we will see, as we will touch on later. The other new dinosaur to join this line-up of Snap Squad figures is Toro – who is believed to be an antagonist within the upcoming short. This Carnotaurus is distinguished by the scar on its face – something which we will see more of later. 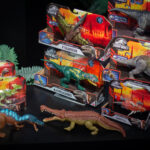 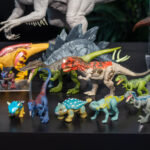 Alongside the new Snap Squad figures, we also saw a plethora of brand-new repaints and re-sculpts of dinosaurs which we have already received in the past. These included the Mussaurus, various Velociraptors (including the third version of Charlie!), the Ceratosaurus, the Baryonyx, the Parasaurolophus and the Stegosaurus. Alongside these repaints we also saw a Protoceratops (although this appears very like the initial release of this figure, if not identical) and a brand-new sculpt for an in-scale version of Bumpy the Ankylosaurus, who we already mentioned earlier. A lot of the repaints on show here use very earthy, realistic-looking tones. The Ceratosaurus is a personal favourite – looking much more menacing than either of the previous two renditions we have seen. It’s important to note that amongst all these figures we have a mixture of Roarivores and Sound Strikes – although which assortment the Stegosaurus will fit into given its larger size remains to be seen, as will most likely fall under the category of a Massive Biter. An important detail to note is the fact that all the dinosaurs on this table will feature in some way or another in the upcoming Animated Show – meaning we can expect to see lots of our favourite dinosaurs debuting in Camp Cretaceous. 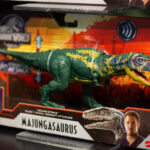 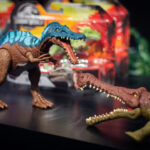 In addition to repaints, we did also get to see two BRAND NEW dinosaurs join the Mattel line-up – the Majungasaurus and the Irritator. Both are incredibly unique dinosaurs. The Majungasaurus sports a dark green colour scheme with lime highlights and fits within the Sound Strike line, whereas the Irritator is also a Sound Strike figure, but is arguably the more interesting of the two in my opinion. The textures on this figure are incredible – with lots of pebbled skin really emulating the more reptilian nature of this creature. The jaw of the animal also feels incredibly crocodilian – lending to its unique style when compared to other similar dinosaurs like the Suchomimus. Combine this with the beautiful colour scheme chosen and we have another fantastic unique dinosaur joining the line-up. These new Sound Strike figures are also accompanied by a repaint of the Control ‘N Conquer Carnotaurus – which is branding the colour scheme of ‘Toro’, complete with the scar on the nose of the character. Whether this character receives this scar in the show, or has it beforehand, is yet to be known. These new figures will be available in Fall 2020 – alongside the new big-hitters for Mattel’s 2020 line. 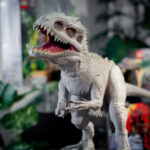 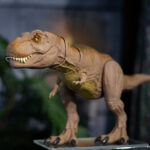 The first of these big-hitters is a BRAND-NEW version of the Tyrannosaurus Rex. This newest rendition of Rexy features a refined sculpt – including an altered jawline which is much more akin to the dinosaur’s anatomy as it appears on screen. The new version features all the scarring you would expect, and even comes complete with electronic features. This figure is set to retail for $39.99 – and will release everywhere come Fall 2020. Alongside the return of Rexy, we also see the return of the Indominus Rex – in two distinct versions. The first is the Feeding Frenzy version of the Indominus Rex – who will retail for $24.99 and is a slightly more adorably, but gruesome, version of everyone’s favourite Hybrid. This figure certain feels inspired by the success of Primal Pal Blue in 2019 – so we are excited to get our hands on this one! Alongside the smaller version of the Indominus comes the colossal (quite literally!) Super Colossal Indominus Rex – which will retail for $54.99 and is the latest Super Colossal dinosaur to join the assortment. This one is bound to look great displayed with your T-Rex – and your Amber Collection figures! As with the Tyrannosaurus Rex, both figures will also be available from Fall of this year. 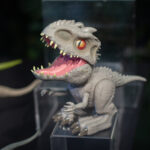 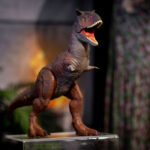 That about wraps up our look at everything which was on show at the Universal Showcase event on the first day of Toyfair! It’s safe to say that we had a blast getting to check out a ton of these awesome new toys, and are excited for what the future may hold. Universal are clearly very passionate about keeping Jurassic in the limelight currently – so we hope this level of attention continues moving forwards. Now it’s time to switch over to you! What are you most excited for out of the items featured in this article? And are you excited for Camp Cretaceous to debut this August?

Let us know in the comments, and check out the rest of our HD images from our time at the Universal Showcase at the link below. Huge thanks to our dedicated Toy Fair photographer Tim Cianfano (@timcianfanophoto / @jurassiccontrast) for capturing these wonderful images – come back for more in our Mattel Booth recap article later this week!