Back for more, huh? We really hope you enjoyed our coverage of the Camp Cretaceous showcase that Universal Studios put on during our visit to New York Toy Fair 2020. Before we get any further, however, we want to say a huge thanks to our dedicated New York Toy Fair 2020 Photographer – Tim Cianfano (@timcianfanophoto / @jurassiccontrast) – who made our in-depth coverage of this year’s toy fair possible. Make sure to check him out if you haven’t already! 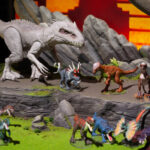 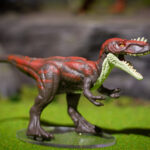 With the intro out the way, we’ll dive into today’s article. Now it is worth noting that whilst a handful of new items were revealed at this event, the bulk of Mattel’s reveals were made during the Universal event – so we won’t be covering any of the items which were shown during the showcase. This article will consist mainly of the repaints which Mattel showcased at the event – ones which were not on show during the initial showcase, but which will also be released in 2020 alongside the Camp Cretaceous toys. Sprinkled in are also a few all-new pieces, which will take the time to look at in a little more depth. So, without any further ado, let’s look at some of Mattel’s additional offerings from Toy Fair 2020! 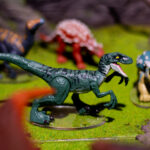 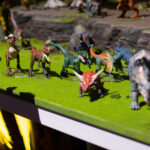 Up first we have those repaints which I have already touched on. Now, whilst I think it is safe to say that repaints are never as exciting, these ones do a very nice job of bringing some refreshing looks and styles to the line. We can see repaints of several different dinosaurs – from Herbivores like the Minmi (which is already popping up in some places!), to an assortment of brand-new Velociraptors which appear to be both unique colour schemes and some Raptor Squad members. Arguably the most exciting repaints, however, are the rarer dinosaurs which we see popping back up as a part of the line. For the first time, we have a BRAND NEW non-movie colour scheme Stygimoloch – something which I am sure will excite fans of this dinosaur. Alongside this we have a new Pachycephalosaurus and a BRAND NEW Styracosaurus paintjob – a dinosaur which sold out rather quickly in the first wave of Dino Rivals figures. It is safe to say that dino fans who missed out on this great dinosaur the first time around are bound to be excited to see this figure return. 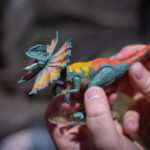 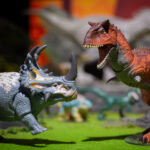 We were also able to get a better look at some of the prior-announced dinosaurs from the Universal event here – allowing us to get up close and personal with the details of these figures. Where it begins to get exciting, however, is with the introduction of two new figures – although they are not necessarily new dinosaurs. The first is a gorgeous new rendition of the Dilophosaurus – a fan favourite dinosaur from the original Jurassic Park. This figure looks gorgeous – with bright and vibrant colours, and nice larger-scale frills on the figure. The new pose and sculpt for this figure help to make it feel incredibly unique when compared to its past counterparts. Alongside the new version of the Dilo comes a brand-new and much more accurate version of the Sinoceratops – a figure which looks gorgeous. The brand-new head sculpt which Mattel have gone for is spot-on to the dinosaur we see within Jurassic World Fallen Kingdom – with everything from the crest of the dinosaur, to the horn and the pupils looking beautifully authentic. This is far more accurate than the original release of this dinosaur – and is one which I am incredibly excited to add to my collection when it releases later this year. 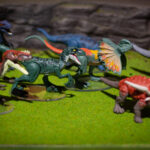 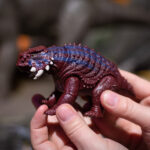 The excitement doesn’t end there, however, as we also had the debut of two BRAND NEW dinosaurs who are joining the assortment for 2020! The first of these is the incredibly beautiful looking Alioramus – a Carnivorous Theropod from the Late Cretaceous period. A dinosaur found in Asia, the Alioramus feels a lot like a Proceratosaurus but with some key differences being the two-fingered hands, as well as the incredible unique head sculpt which appears to have feathers on the back. This is a gorgeous looking theropod in its own right – and is another example of the great level of diversity Mattel have strived for throughout this line. Equally intriguing and exciting is the Scutosaurus – a genus of para-reptile found in Russia during the Permian era. As a fan of Primeval seeing a dinosaur which was alive as the same time as that show’s iconic Gorgonopsid has me incredibly excited. This, again, shows that Mattel are willing to explore a whole plethora of different eras and dinosaurs throughout the line – suggesting that we are still only scratching the surface of the potential for this line. It is safe to say that this news has our whole team incredibly excited for the future, as it appears nothing is off the table when it comes to figure choices! 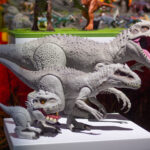 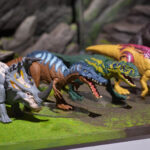 With all of this said and done, it has been another incredibly exciting year for Jurassic toys at Toyfair! Next year promises even more in the way of exciting new products to tie in with the release of Jurassic World 3 – something which I think we all find incredibly exciting as this means that many of our biggest dreams may be realised. Before we even think about 2021, however, it is important to step back and appreciate all the great products we will be able to get our hands on VERY soon. We’re excited – and we hope you are too! 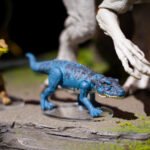 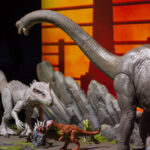 We hope you’ve enjoyed our toy fair coverage. A big shout out to the dynamic duo of Tim and Tim for making this possible. Stay tuned for more news on the collecting side of Jurassic as soon as we get it!