You’re joining Tom here on Collect Jurassic – and today we are talking about something a little bit different! Instead of looking at something from Jurassic Park or Jurassic World, we will be looking at something which is much more broadly Dinosaur related – a figure of a Stegosaurus from Safari Ltd. This is part of an ongoing series in which we will be looking at a small segment of Safari’s 2019 dinosaur offerings, as they were kind enough to send us three individual figures to review. So, without any further ado, let’s jump straight into everyone’s favourite plate-backed Herbivore – the Stegosaurus! 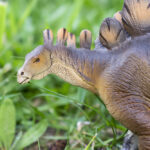 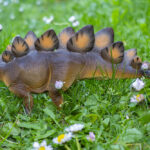 Safari’s 2019 Stegosaurus is beautiful – using some incredibly rich, earthy tones to communicate an animal which looks incredibly naturalistic, whilst still featuring some prominent artistic flair. The main body of this stunning creature is painted in a dark brown – with the underbelly painted in a much lighter tan colour to really capture distinct colour variation on the character. I really like how well the two colours fade together here – creating a figure with a crisp and fluent colour scheme. I also really appreciate the extra highlights around the character’s feet – darker brown detailers which emulate the idea that this character has been out in a muddy environment. The plates, arguably the Stegosaurus’s most iconic feature, are also detailed intricately. They feature that earthy brown colour scheme but with sunburnt orange highlights shining through – creating a great aesthetic which is complimented nicely by the character’s black stripe highlights. 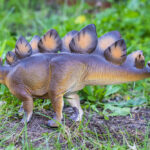 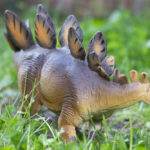 The actual sculpt of this figure is incredibly nice too. One thing which really took me back here was the level of texture and depth which the figure’s muscles and pebbly skin have. Having only owned Mattel figures before, I thought I had seen the highest-level detail I could – but here, the levels of folds and shadowing really are a step beyond. The hind legs of the animal feel incredibly bulbous and muscular – and this is thanks to the deep creases and marks on the skin which really help to communicate accurately the sheer volume of muscle that this animal would have had. Not only does the skin and muscle feel masterfully recreated – but the key points of the animal are communicated well too. The plates are well sculpted with a nice level of texture, and the beak and face look phenomenal – really capturing the less intimidating appearance that this dinosaur had. I also adore the look of the tail spikes – which genuinely appeared to be branches almost when I first removed them from the box. This really does highlight the level of genuine authenticity which this figure strives by – and is something which I think is worth picking up. 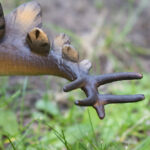 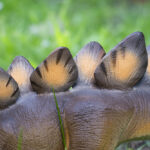 Overall, the Stegosaurus is a really, nice addition to Safari’s 2019 collectible line-up. Retailing for $24.99 USD, this is one of the more expensive figures within the Safari line-up – but you can see why. The commitment to detail and authenticity here really does make this one of my favourite figures I own – and this will take pride of place on my computer display for when I am typing up my Jurassic articles!

Thanks, again, to Safari for sending this sample my way. If you would like to pick up your own Stegosaurus, you can ‘Bag it’ on the Safari Ltd store today for an extra 20% off courtesy of Collect Jurassic. Just use promo code “CollectJurassic1”, or click on the link below.