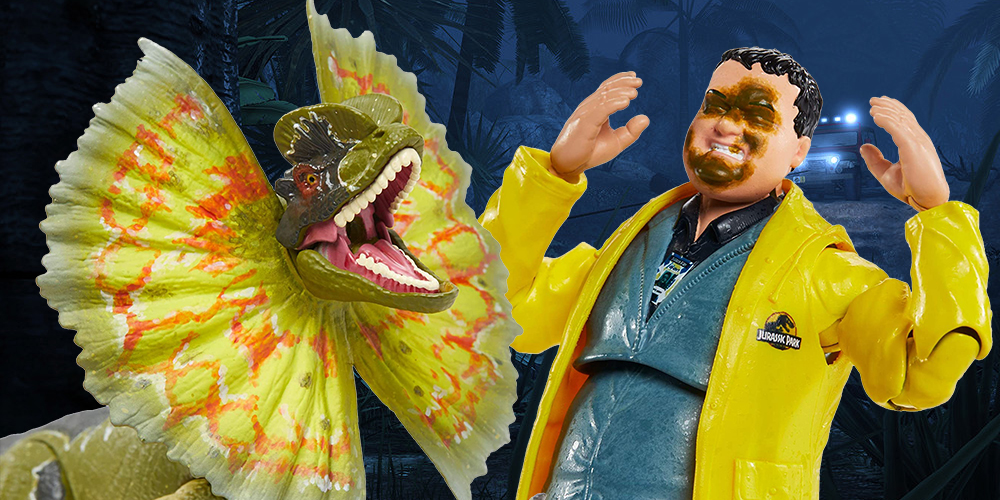 Jurassic June has only just begun, and already it seems as though fans of Jurassic Park are being treated to even more exciting new merchandise, as Amazon Spain has revealed our first look at the next additions to the Amber Collection line.

We’ve known for some time now that Dennis Nedry and the Dilophosaurus were set to be the next figures to join the six inch collectors line – but we haven’t heard much about these illusive new figures since they were teased earlier this year. Now we can see the final figures and they are some pretty great new additions to the line! 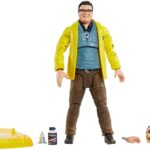 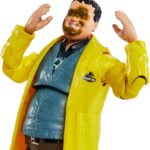 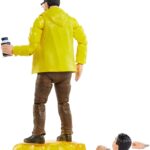 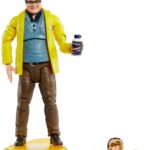 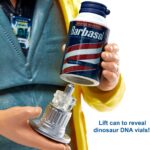 Up first we have Dennis Nedry – the computer hacker who almost singlehandedly brought about the destruction of the original Isla Nublar park in 1993. Nedry comes in his iconic Yellow rain jacket which we see him wear in his penultimate moments – complete with the iconic Jurassic Park logo adorning the chest on one side. He also has his zip-up blue shirt underneath, and the team at Mattel even managed to pack in a rather well detailed In-Gen identification badge – really going above and beyond to commit to the detail this time around. Nedry comes with his Amber Collection Display Stand, two alternate hands, an alternate face with Dilophosaurus Venom on it and a Barbasol Can – complete with a removable embryo storage device! This really is a step-up in terms of details on the accessories, and we can’t wait to get out hands on this figure. 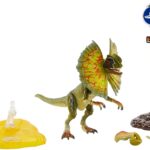 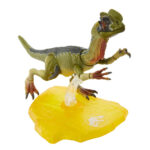 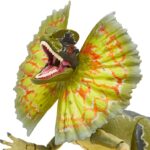 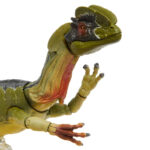 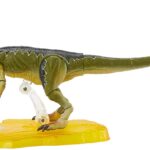 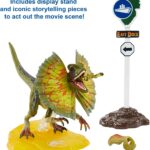 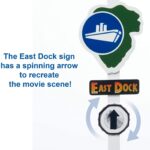 Alongside Nedry we have the Dilophosaurus, as we mentioned, as this figure looks absolutely beautiful. The Dilophosaurus comes in with its lime green colour scheme from the first film, but also features intricate paintwork on the frills, as well as on the face and around the eyes. The figure looks smaller in size and stature than the Velociraptors which we have already seen in the line – and there don’t appear to be many, if any, reused parts here – something which is nice to see. This figure comes with a hole in its mouth, like the 3/34 inch figures, so that you can place a venom effect in the mouth, and also comes with an interchangeable frill so you can either have the figure poised for attack or positioned in a more docile and friendly pose. This, combined with the variety in accessories with Nedry, will certainly give collectors poseability options for their shelves.

Mattel went a step above with the Dilophosaurus, however, as it also includes the East Dock sign complete with spinning directional arrow – allowing you to fully immerse yourself in this iconic sequence.

Overall, we love these figures. We have a few nit-picks (as we do with most figures) but these seem like a further step in the right direction for the Amber Collection – with a lot more detail, and crucially, more accessories too! We are excited to pick these figures up when they release in late June/early July, and are eagerly anticipating where the Mattel design team decide to take the Amber Collection next.

Thanks to Jurassic Toys on Twitter for the scoop.