Welcome back to another look at one of Safari Ltd’s 2019 Dinosaur figures right here on Collect Jurassic this Safari Friday! The figure we are breaking down today is a carnivore who is synonymous with one of the most divisive entries in the Jurassic franchise to date – with Safari offering a new and refreshing interpretation of this Spinosauridae. If the divisive film entry, and the scientific family name don’t give it away – today we are looking at Safari’s 2019 Spinosaurus. 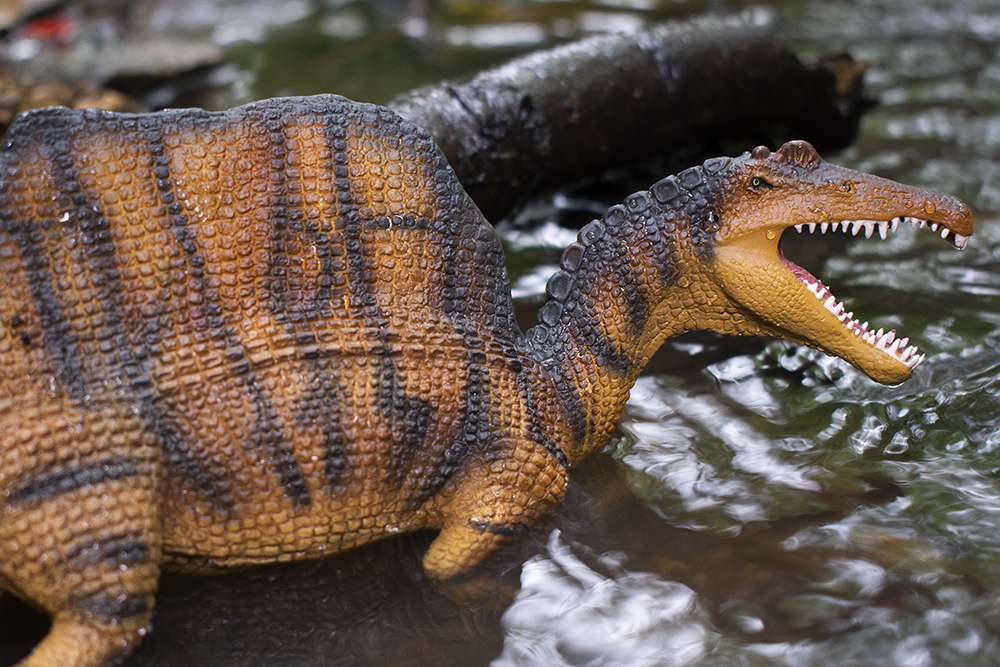 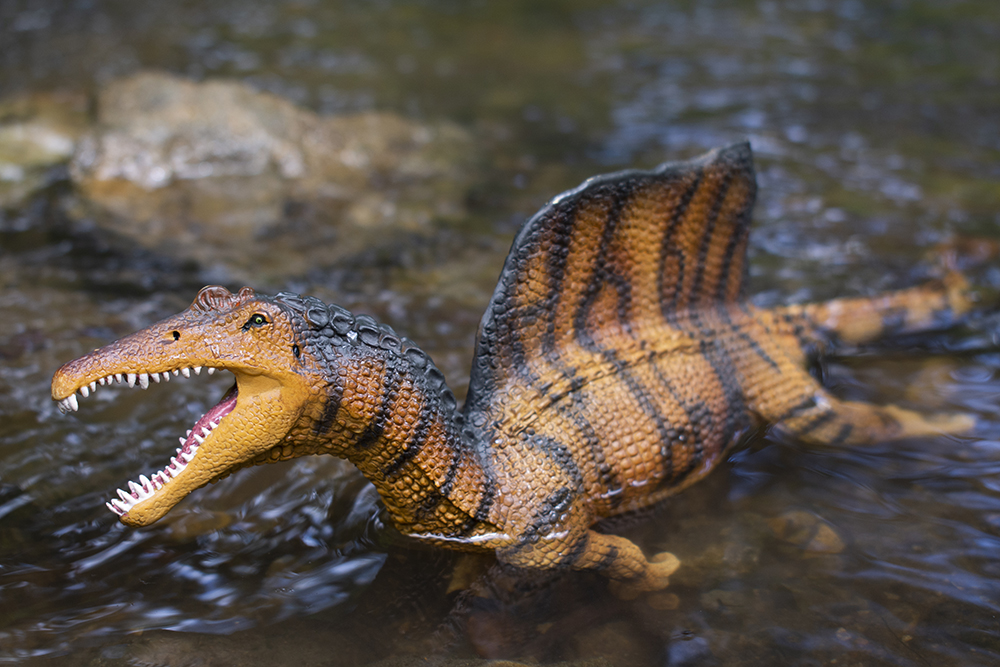 Now I want to kick this off by saying how much I love that Safari decided to dive into the current scientifically debate around the Spinosaurus for this figure. For anyone who isn’t aware, there is a massive debate within the scientific community currently about this dinosaur – and whether it would have been a theropod or a quadruped. This is a debate which has palaeontologists of all calibres weighing in on it – so it is great when we get a taste of what that four-legged interpretation of the Spinosaurus may look like. Now looking at the figure itself – I want to touch on the sculpt first this time around, purely because Safari made an incredibly creative design choice with this dinosaur which I think really pays off. This dinosaur comes in a swimming pose – with webbed feet outstretched, and snail snaking at an angle as if it is navigating a body of water. I absolutely ADORE this decision by Safari, as it adds so much unique value to this rendition of the character. When working with static characters, it is hard to capture poses which feel dynamic and memorable before the default standing pose – so this truly is a flawless design decision. 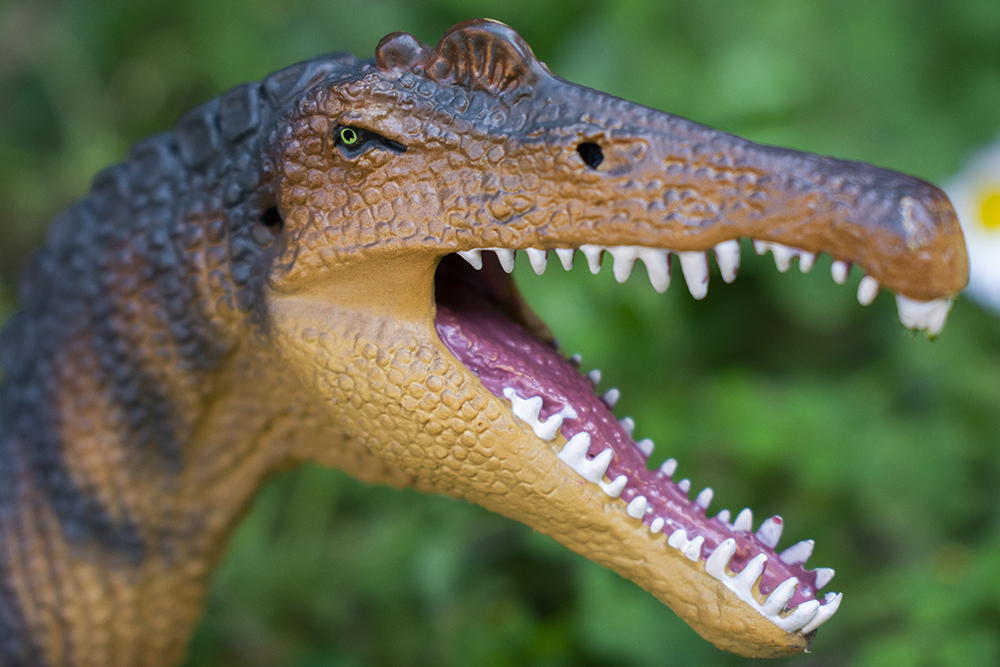 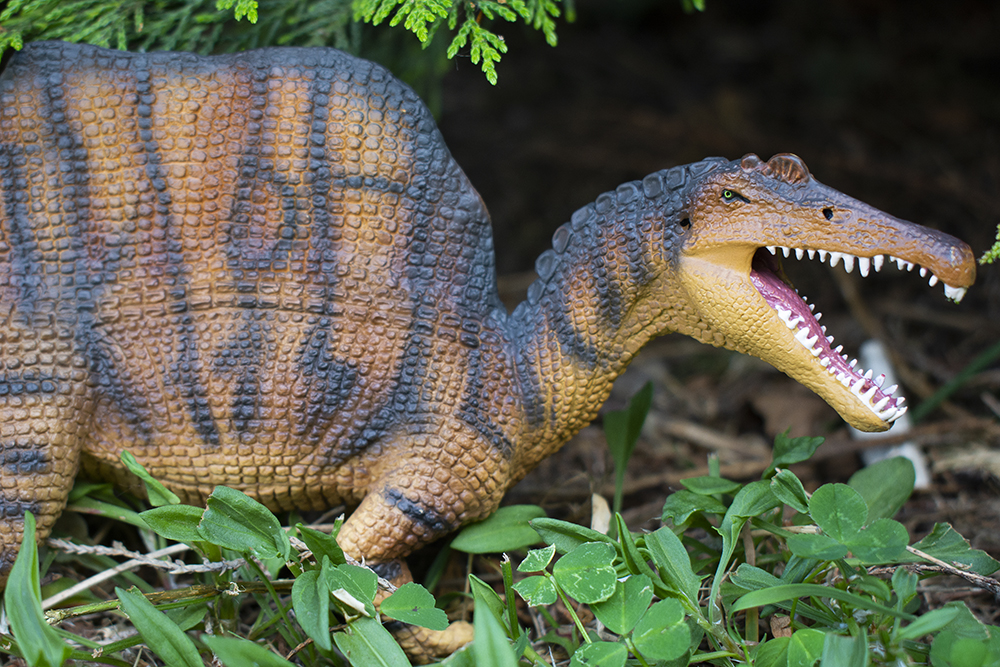 While we talk about the sculpt, I must touch on the level of detail here. I know we’ve spoke at great length in our past two editorials about how detailed the sculpts are, but the Spinosaurus really does feel above and beyond. The level of intricacy with the texturing on the Spinosaurus here truly is incredible – with the different sculpted details in the tail mimicking the skin of something like a rattlesnake. Being able to make this incredibly positive association with something we see day-to-day in a real-life environment absolutely encapsulates how perfect this figure and its level of detail is. Everything feels incredibly well sculpted here – with a real attention of detail to depth and feel. The Spinosaurus has some incredibly intricate details – from the great crest which is present on its head, to some phenomenal details like actual textured taste buds on the sun – which really help to make this character feel real within the best possible sense of the word. I do also want to quickly touch on the webbed feet here – as these are a subtle detail on this dinosaur, but are something which I really appreciate – as it highlights perfectly how Safari went above and beyond with this interpretation of the Spinosaurus. 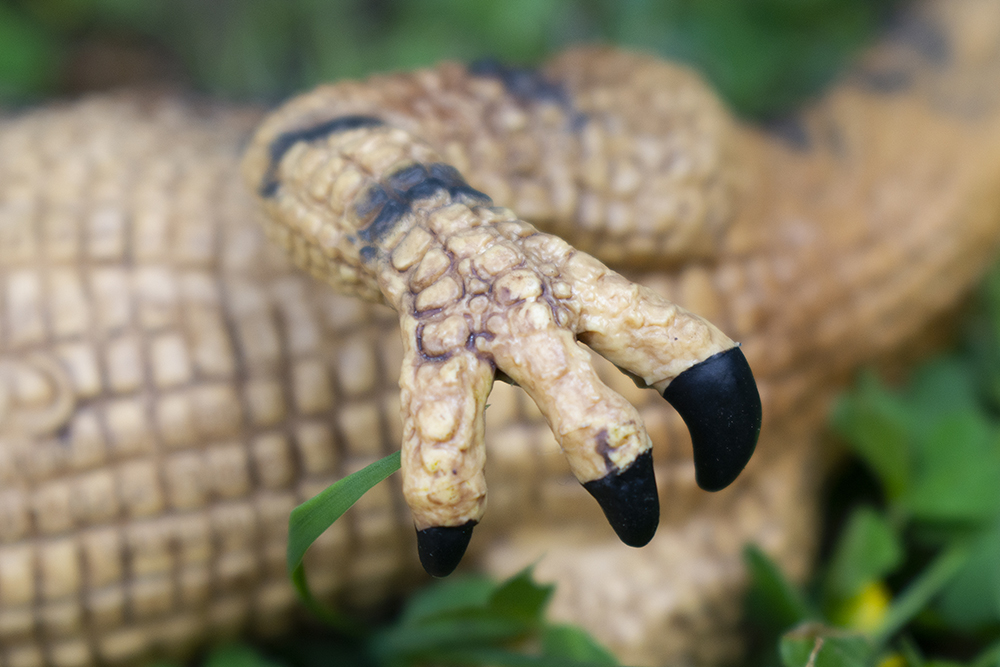 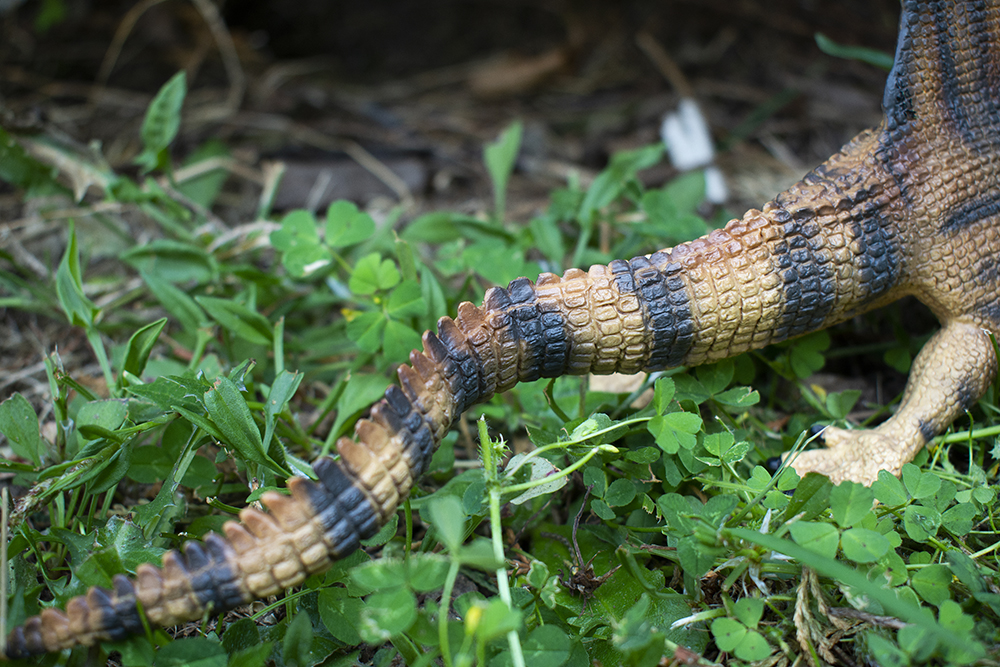 A great sculpt is one half of the complete recipe for a good figure however – with the other half being great paintwork. And, I must admit – the paintwork here feels like it takes a step up over the others, just like what you would expect for a figure which is a slightly higher price point. Everything here is fantastic – with the base tan version of the figure painted over with a burnt-orange ‘crisp’ colour tone which looks really, nice. This combined with the slightly faded black patterns creates a dinosaur which looks seriously appealing – with great visual flair and patterning which is consistent throughout the creature. Even in areas like the feet, we have multiple layers of paint – with dirt-washes used to really make the sculpt pop from the figure. I also love the bright pink paint used for the tongue here, the white on the teeth, and the green on the eyes – as all these colour choices really pop when compared with the dinosaur’s skin, making something which has a great degree of visual contrast to it. Looking at this paintwork here, I adore this figure – and think that it is, by no doubt, the best of the three-figures we have looked at so far in both paint and sculpt.

If you’re a dinosaur fan, I really think you will love this rendition of the Spinosaurus. It features an incredibly unique pose and sharp yet realistic-feeling colours – all of which really make the creature pop. This, combined with a reasonable price point of just $24.99 really does make this feel like one incredible figure which is more akin to a collectible than a relatively low-budget figure. If you pick up one figure from the Safari 2019 line-up, make it the Spinosaurus aegyptiacus, and use code CollectJurassic1 on the Safari Ltd store to get 20% off your purchase of this beautiful animal.

At around $19.99 with that discount code applied, you won’t regret adding this Safari Dinosaur to your collection.