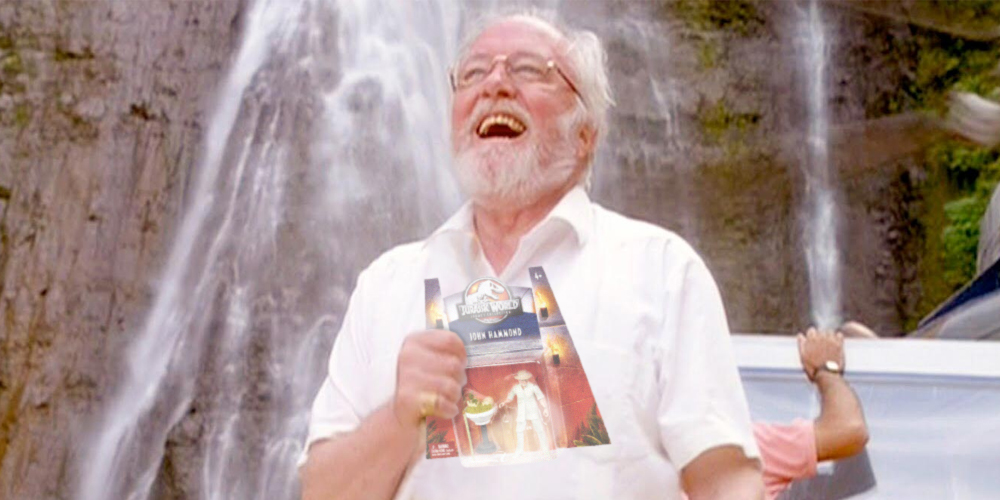 Please welcome our newest Collect Jurassic contributor, Victoria. You may recognize her as the co-host of the Collect Jurassic World podcast, as well as from her YouTube channel and Cantina Chatter podcast.

For decades, exclusive products have been a necessarily reality for many toy lines. I often tell people that if it came down to a toy being a store’s exclusive or not being made at all, let’s be content we have to hunt down an exclusive. Convention exclusives, however, are more complicated. Rather than being isolated to a Target or a GameStop, where most Americans can pop into the store and check to see if their latest prize is on the shelf, convention exclusives are the ire of many a collector. Not only are they overpriced and subject to availability; they are also often variations to previously released or upcoming product.

On Monday, Mattel dropped their surprise San Diego Comic-Con 2019 exclusive Jurassic World Legacy Collection John Hammond 3.75” action figure as part of their pre-order lineup on the Mattel Shop website. Limited to five figures per guest, the figure was priced at $15 and shown to come with a raptor egg incubator and snazzy packaging. And although anyone could order Hammond, the fine print explained that buyers would have to check in at the Mattel booth at Comic-Con in order for their purchase to process into shipping. Ouch!

In 1993, Kenner produced their classic Jurassic Park toy line. With it, they did many things they were doing very well in the 90s. This included an assortment of action figures based on characters from the film. (Or the book, depending on your point of view.) However, John Parker Hammond, creator of the park, and his granddaughter Lex Murphy were notably absent. One of the things Mattel has done extraordinarily well is provide longtime fans and collectors an expansive line of toys based on the entire Jurassic series. With their Legacy Collection line, available exclusively at Target in the US, they recreated a selection of characters from the original film. In 2018, fans were still wondering where Hammond was after 26 years.

In my August 2018 Cantina Chatter Podcast interview with then-Mattel Jurassic World Global Brand Manager Britt Shotts, she hinted at the possibility of a Hammond figure being in development. With the Legacy Collection being largely discontinued by Target by year’s end, hopes for further characters began to dwindle. Even now, the last bit of Legacy at Target is the Tyrannosaurus Rex pack, and in some stores, the Extreme Chompin’ Tyrannosaurus Rex. Items slated for the end of the line, such as the Story Packs, were scrapped and ended up in South America and Asia, and the third wave of $10 dinosaurs was canceled. However, collectors knew that the Brachiosaurus was still on tap. And by the time its product packaging was revealed, none other than John Hammond was featured on the box’s artwork. Was this a hint at what was to come?

The announcement of Dr. Hammond as a Comic Con exclusive has, of course, led to outrage. Understandably, some collectors are confused and angry. After all, it has taken 26 years for Hammond to be a true action figure, and now that he has been made, the only way to get him will be at a convention that most collectors will not attend. On the surface, this might be a perplexing exclusive. But collectors should not be worried. As a lifelong collector who worked for a toy company for a number of years and has studied the industry extensively, I hope to put worried minds at ease. While I cannot explain the choice of Hammond as an exclusive, I can explain where I think things are going with this figure.

For years, the trend with convention exclusives has been double-dipping. While conventions like San Diego Comic-Con obviously draw tremendous crowds, people attend for different reasons, and only a minority of them are there for toys. Companies that offer exclusive toys will only sell those items to a fraction of attendees. Given the costs associated with designing, developing, and manufacturing a toy, it is virtually impossible to make a return on investment with convention exclusives. For that reason, most toy companies choose to double-dip. This means that the item that will be on sale at the convention will only be exclusive in the sense that some aspect of the item will only truly be exclusive.

There are numerous examples of double-dipping that we can cite. One of the most well-known in recent years is the NECA Teenage Mutant Ninja Turtles 7” figures. These are figures so popular that they literally have sold out in one minute during their online pre-order nearly every single time. Unbeknownst to collectors at the time, those figures were launched at Comic-Con to test demand. When that demand proved to be overwhelming, the figures were then later released through GameStop and Target. Talk about real-world market research!

The same strategy of offering figures initially at conventions and then releasing them widely has also been done time and time again by Hasbro. For years, this has been their practice with Star Wars The Black Series and The Vintage Collection. They have done it with Marvel Legends. Bandai has done it with Power Rangers. Even Hot Toys have gotten in on the act by offering variants of their high-end figures through Comic Con. There is always something at least slightly different, whether it be packaging, an accessory, or a unique color palette. Thankfully, these exclusives are often sold online following the convention so that unsold stock can be picked up by other collectors. Heck, they even ended up at Toys ‘R’ US sometimes when those were still a thing.

Going back to John Hammond, I suspect that Mattel is aware of how much collectors want him. I believe they anticipated the frustration at his announcement as a convention exclusive. And I fully believe that his SDCC release is a “pre-release” to a mainline or Legacy Collection version coming in the future. After all, Mattel spent a good deal of money to develop the figure. And they cannot recoup their investment by only selling it to a few people at a convention. That’s not good business, just as it’s not necessarily good business to say off the bat that it is not really an exclusive because it will also be sold in stores later on. What would be the point in doing that when the goal is to sell as many of the figure as they can at the show at a premium?

It’s also important to address the fact that Legacy Collection is all but discontinued at Target. Hammond is a Legacy figure, and he would make most sense as a basic figure alongside the likes of Dr. Grant, Dr. Sattler, and Dr. Malcolm. However, Target put those on clearance. That assortment is gone. Now, I do not have any inside knowledge, but my educated guess is that Hammond will be part of something bigger than a standalone figure in the future. Does that mean a multipack that includes repainted dinosaurs? Or, maybe a Ford Jungle Explorer bundle? I have no clue. However, I am confident that Hammond will be back. He may not have his raptor egg incubator, and the packaging will almost certainly be different, but there is no way that this story ends with Hammond being a one and done thing for a few fans at Comic Con.

I believe that people who make the effort to attend conventions are entitled to incentives. But I also know that companies don’t typically do things when there is great risk involved if they do not foresee a payoff. And in this case, I believe the payoff will be the double-dipping of Hammond for the mutual benefit of both Mattel and Jurassic Park collectors. And I think we may get that news sooner rather than later.