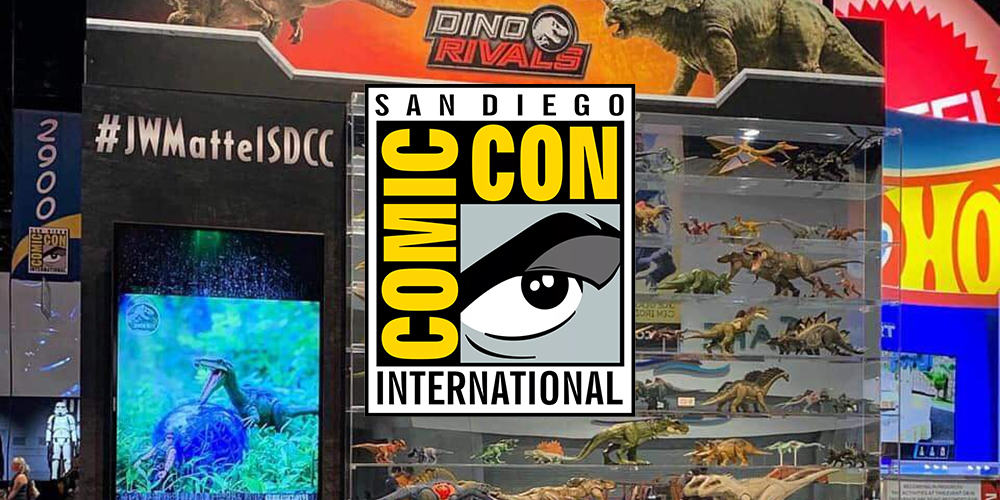 Note: Much of the photography in this article was provided by Toy Shiz and Juegos Juguetes y coleccionables. Collect Jurassic would like to thank them both for sharing their SDCC experience with us!

San Diego Comic Con has officially begun! The show’s “Preview Night” started this evening, and naturally images of the massive event’s many, many booths began to flow onto social media. Mattel’s booth did not disappoint—two large Jurassic fixtures containing the recently revealed Amber Collection as well as an impressive amount of current and all-new mainline dinosaur figures offer a show-stopping look at what’s ahead for Mattel’s Jurassic World toyline. 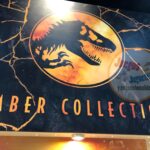 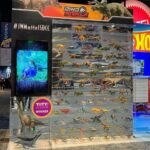 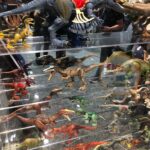 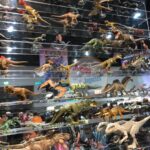 The Amber Collection’s proper introduction comes in the form two dioarama scenes, showing the ~6-inch scale Ian Malcolm and a Jurassic Park Velociraptor plus Owen Grady and Blue. The figures themselves look drastically improved over their prototyped that were shown at least year’s show. While the blurry photos from last week didn’t show much in the way of detail, we now can see each mold packs a ton of carefully crafted textures. The Raptor’s skin is full of miniature scales and ridges while the fabric folds in Owen’s shirt look appropriately realistic. The matte finish on the human figures also brings a more high-end feel to this collectible line verses their 3.75 inch counterparts. 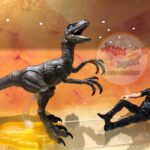 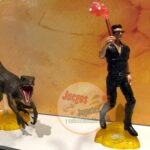 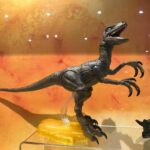 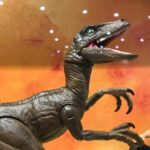 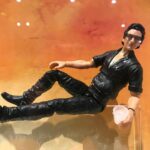 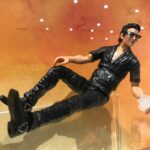 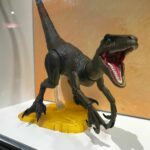 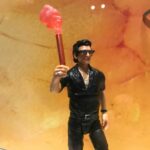 As far as further details on the Amber Collection, we now know that it will be a GameStop exclusive here in the US.  A few of the figures are even up for preorder on GameStop’s website as of tonight. International release details are not known at this time, but we will undoubtedly learn more about those plans and more over the course of this weekend. Overall, the Amber Collection’s initial debut at SDCC is quite impressive. The figures themselves look amazing, we just need to learn more about when and how they’ll be coming out!

Aside from the Amber Collection display, Mattel’s setup this week also includes a massive, figure-filled wall along with a screen showing toy photography from all around the Jurassic community. While we don’t have any clips of that video to share quite yet, this community-created element is already one of the cooler features of the booth that we can’t wait to see more of!

The towering shelves of  Jurassic World dinosaur figures beside that monitor not only look impressive, they also contain some all-new, previously unseen toys. While it’s easy to get distracted by the Battle Damage Spinosaurus or the Legacy Collection Brachiosaurus on display, a careful eye reveals two repaints coming our way soon. What looks to be a red Baryonyx Roarivore and a brown Dual Attack Triceratops round out a larger assortment of current releases that line each shelf. The Jurassic Facts app already tipped collectors off to new figures of these species, but this is our first time seeing what those toys would actually look like. 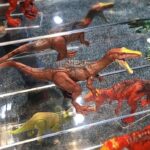 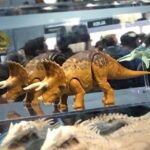 As you’ve seen here, there’s already so much to take in from this year’s San Diego Comic Con—and the show hasn’t even started! We expect more new Jurassic announcements outside of just Mattel this weekend, in addition to more surprises from our favorite toy company during the Mattel Jurassic panel on Friday. Be sure to follow Collect Jurassic on Instagram, Facebook, Twitter and YouTube for the latest up-to-the-minute details as well as here on the site for in-depth write-ups during the show!