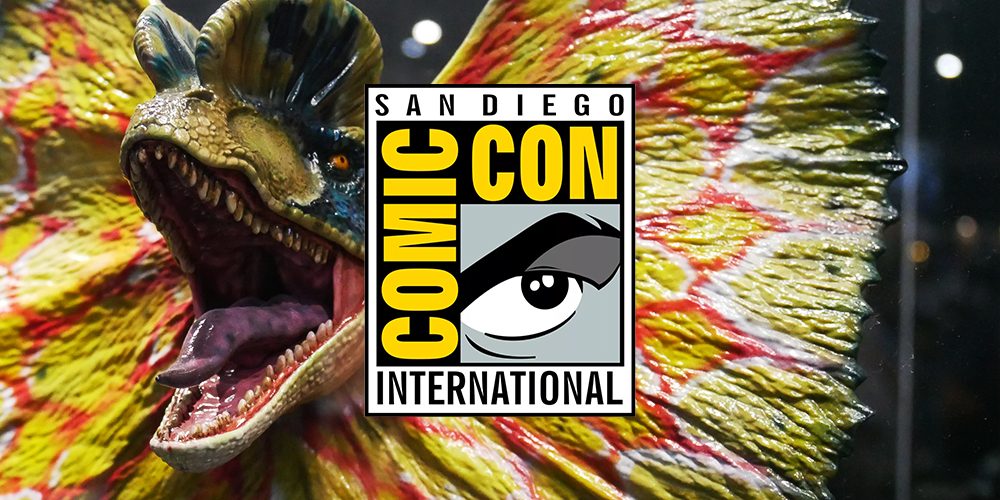 Of all the comic conventions that take place, none is as famous or legendary as San Diego Comic-Con. Set in beautiful, sunny San Diego, Comic-Con plays host to the latest in entertainment, toy and collectible merchandise, comic books, and nerd culture. Every year, the show seems to grow bigger and bigger, with visitors coming from around the world to take part in a celebration of their favorite films, TV shows, comics, and brands. Although many of us are a world apart, Comic-Con reminds us that we share common interests, and meeting others that enjoy the things we do helps to bring us closer together.

As always, Mattel was present at this year’s Comic-Con. Their booth was located in the middle of the jam-packed exhibition hall and spotlighted their Masters of the Universe, WWE, Batman, and Jurassic World brands. While all of their product was intriguing to explore, we were of course most drawn to their Jurassic World offerings. 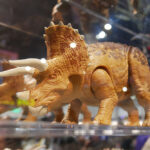 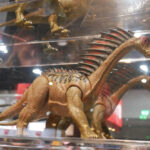 At their Jurassic World presentation on Friday, July 19th, Mattel previewed 17 new species on tap for 2020. Of these blacked-out silhouettes, three of them were named: Alioramus, Cryolophosaurus, and Edmonotsaurus. In addition, Mattel had a large display featuring many of the dinosaurs they have released over the past year, as well as a few they will be releasing later in 2019. Their mighty Brachiosaurus also made an appearance, as did four new figures from the 6.5” scale Amber Collection: Dr. Ian Malcolm, Velociraptor, Owen Grady, and Velociraptor Blue.

Additionally, Mattel featured a photo reel of Instagram toy photographers showcasing some of their finest work. It is always great to see these great big companies that we give so much of our money to giving back to their fan communities in a small way. Having my work on display at Comic-Con was undoubtedly a highlight of my existence, as trivial as that may seem. 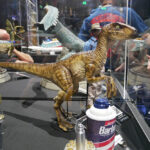 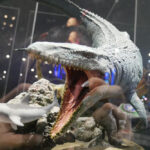 Another company in attendance well-known for their Jurassic Park products was Chronicle Collectibles. In addition to items that had previously been announced, such as their 1/6th scale Dr. Alan Grant figure, Dilophosaurus statue, and Barbasol can replica, they had some new items on display as well. Their large Mosasaurus and Great White Shark statue was on display, and proved to be an impressively-sized and detailed piece. Most impressive, however, was their new 1/6th scale Jurassic Park Velociraptor. The new raptor scales up with Dr. Grant and is meticulously detailed and sculpted based on the original Stan Winston maquette. The coloration is perhaps the closest we have come to in terms of licensed Jurassic Park merchandise, and the figure features some articulation.

Please enjoy this selection of photos from Mattel’s Jurassic World display and Chronicle Collectibles’ booth at San Diego Comic-Con, and be sure to check out the video of Mattel’s booth over on the Victoria’s Cantina YouTube channel!