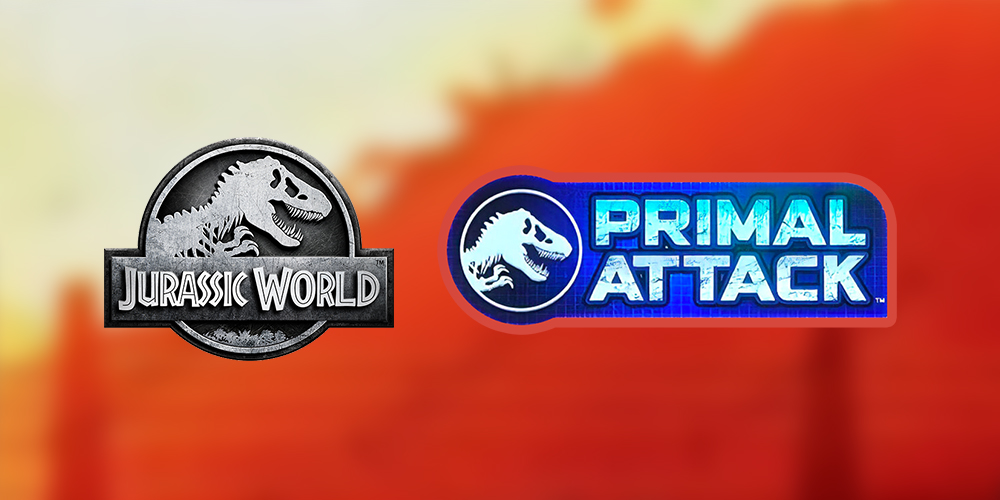 Earlier this month we already got some exciting news on the future of the Jurassic World toyline from our friends at Mattel – with more concrete details on the upcoming Primal Attack line which is set to debut in 2020.

Now, we have some exciting news on what are sure to be three of the most popular items to debut in the first wave of this new line. Before we go any further, we wanted to thank our friends at Jurassic Outpost, who helped us to corroborate our source on this news and refine higher-quality images to share with you all! 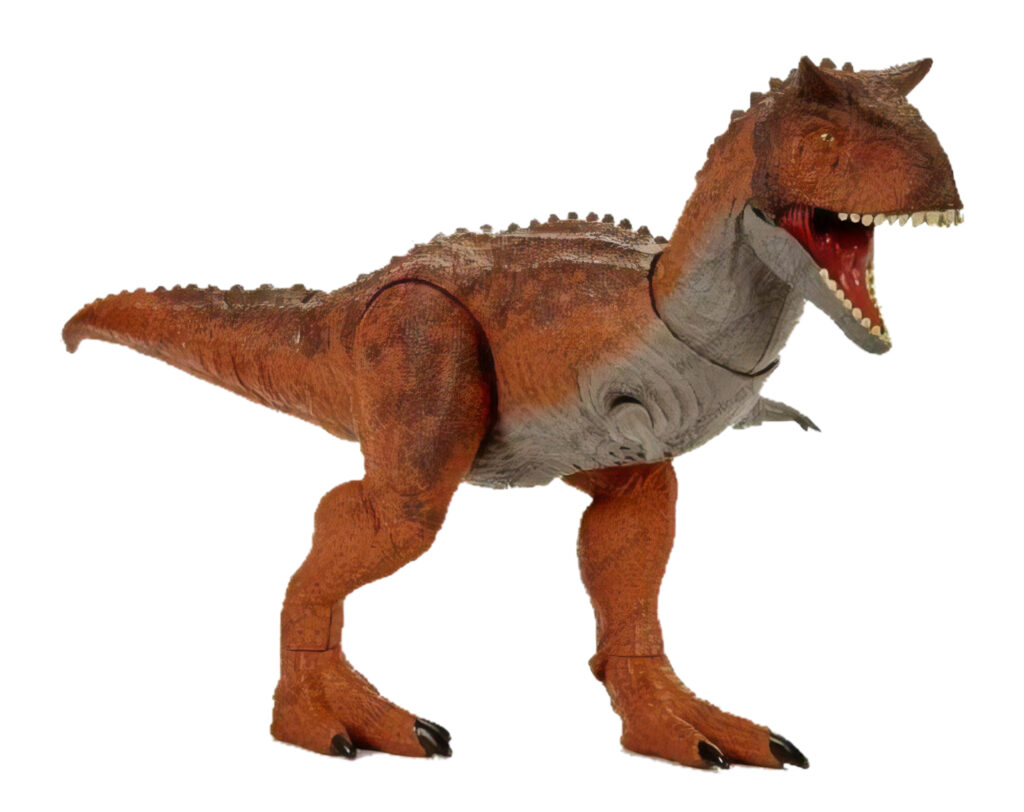 First up – we have our first sneak peek at the Control and Conquer Carnotaurus! Now we have already seen this toy in play in a video which Mattel showed at their booth during their San Diego Comic Con presentation (if you missed it – check out our roundup, found here), and it is safe to say that this is an exciting looking rendition of the Carnotaurus. Whilst that first video showed the similarities between this figure and 2018’s Action Attack Carnotaurus figure, it is safe to say that this toy is looking pretty different. The new figure looks to have a much more earth-like colour to it – not too dis-similar from the repaint of the Ceratosaurus which we saw debut in the 2019 Roarivores assortment. I personally really like this, as I think the dirtier, more naturalistic colours really suit the dinosaur. Whilst the original colours were already relatively muted, these go a step further to really help to make this figure look great. I also love the choice of the light grey for the figure’s underbelly, as this really helps to create a character which looks fantastic. I will be interested to see how this lives up to the Action Attack variant – as it certainly looks like there may be some re-tools and reuses here, although we believe that at least some of the figure will be new. 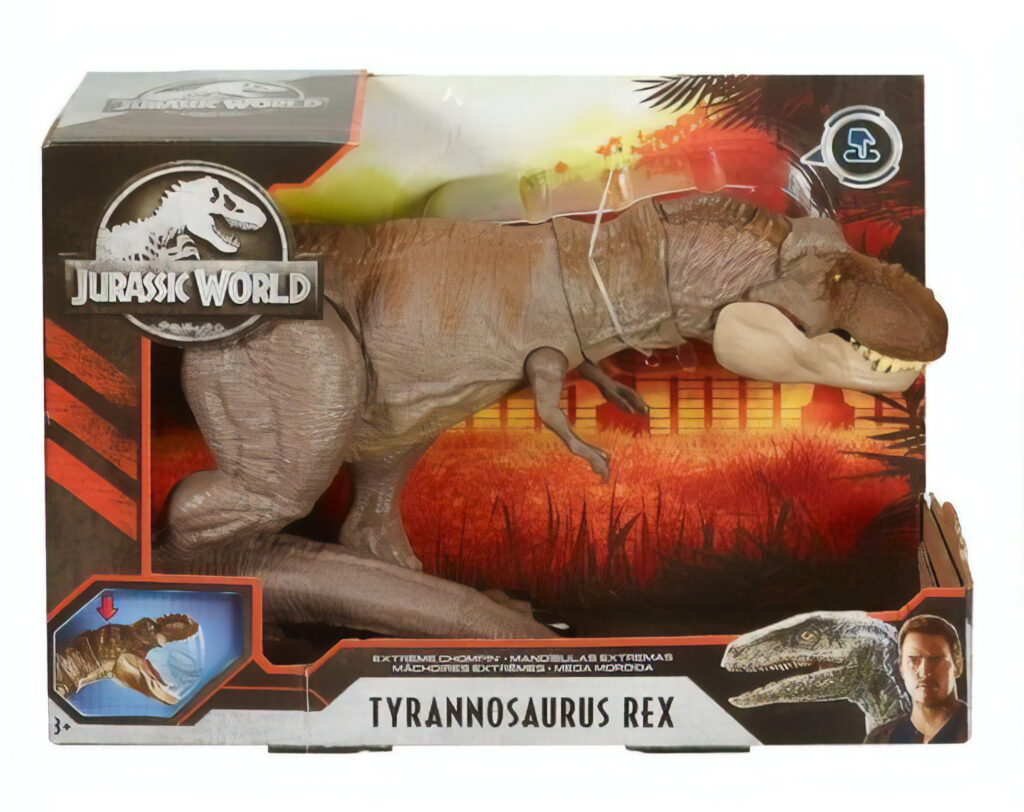 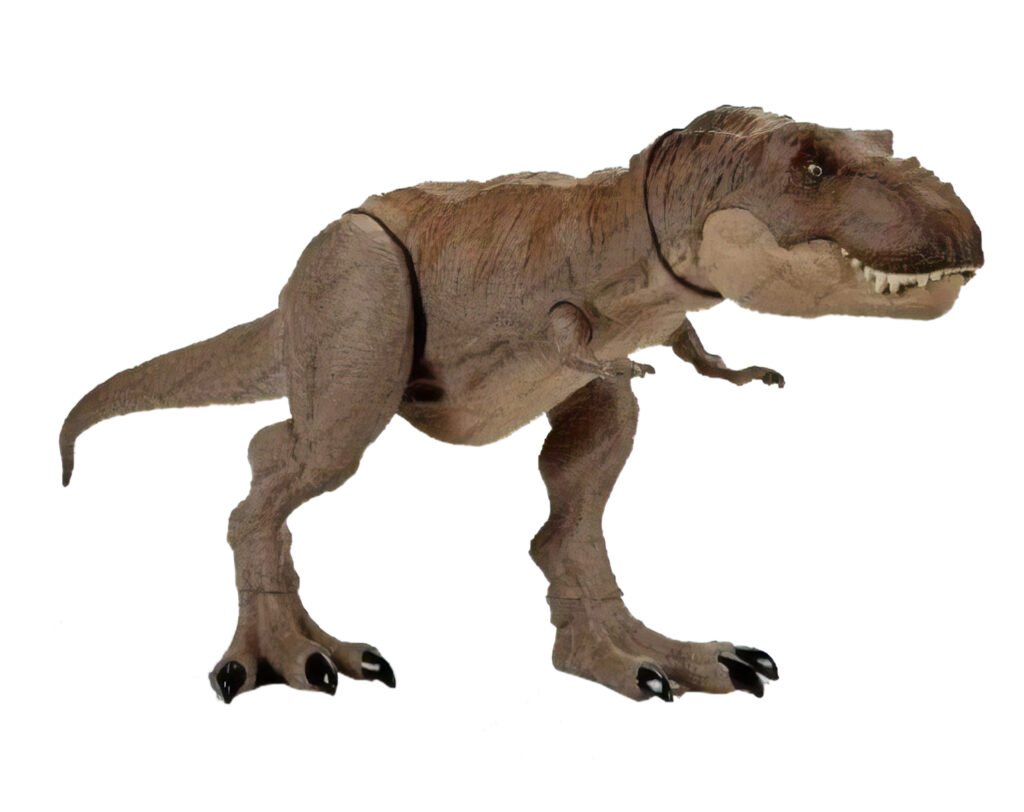 Second, and incredibly excitingly for many Jurassic fans, we finally have a look at the first ever repaint of the popular ‘Extreme Chompin’ Rex which debuted within 2018’s Legacy Collection line, exclusive to both Smyths and Target amongst other chains. Whilst we are not fully sure on how this figure will release at present, it is safe to say that this brand-new addition to the Extreme Chompin assortment is really exciting for collectors who loved the Bite ‘N’ Fight Rex, as it follows very similar colour schemes to that dinosaur. This is a fantastic rendition of the classic Rex, capturing some of those darker colours which we see on her within the film. I can see this version of the character being particularly popular with toy photographers, as it combines smaller dimensions with darker tones, which will make it a lot of fun to shoot with at night time. The lighter brown highlights on the back of the figure, and the beautiful texturing and use of shadow around the snout and eyes really do make this look like a step-up for the line, and I am sure that this will be another rendition which will be incredibly popular with fans who have enjoyed Mattel’s offerings thus far. 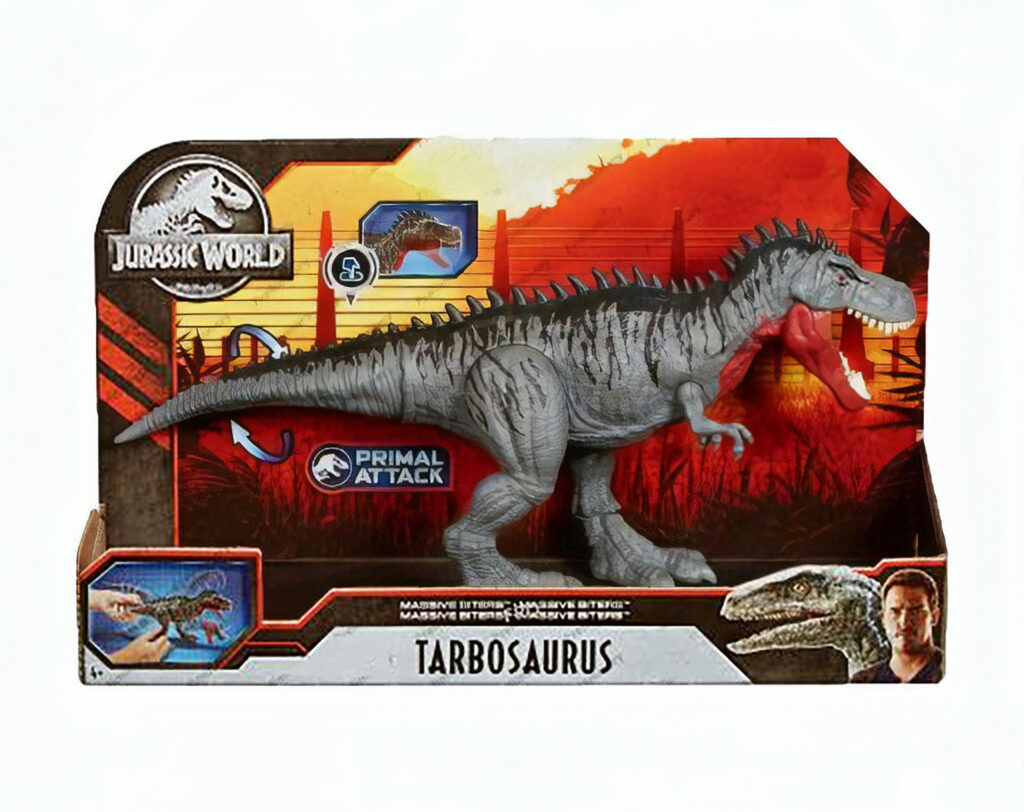 Lastly, but by no means least, we have the beautiful new Tarbosaurus – coming in the brand new ‘Massive Biters’ line which is also set to include the incredibly exciting Sarcosuchus! The Tarbosaurus here is a truly stunning new addition to the line-up, providing Jurassic fans with a great new tyrannosaurid to join the vast assortment we already have within the line-up. This dinosaur does a lot of things which I think fans will appreciated. We have some great spinal extrusions here which are like those on the Allosaurus, but much longer – thus giving the dinosaur its own unique profile. The initial size itself really gives me Albertosaurus vibes – which is exciting, as I feel as though that dinosaur was a perfect medium-scaled beast. I also love how the head sculpt here looks like the T-Rex – but has enough distinctive texturing to look unique enough when compared to its more commonly known relative. One thing I really like here is the choice of red for the lower jaw and underbelly. This sets a much more aggressive demeanour for this animal – and it is something which we haven’t seen Mattel play with thus far, so it is great to see the team getting even more creative and imaginative in 2019. Last, but certainly not least, we must touch on the wonderful box-art – which has some incredible detail. I love the simulated park fence in the backdrop, and the red glow which the team have chosen for the artwork. It really pops and has a real sense of danger about it – something which I think will really appeal to kids, and will make this line a hit in a non-movie release year. Overall, if this toy is an indicator of the quality we can expect from the ‘Massive Biters’ line, then I am SERIOUSLY way more excited to see the Sarcosuchus – and that was already my most anticipated toy of 2020!

What do you all think of these three new dinosaurs? Will you be adding them to your collections? For me personally, I am hopeful that the continuation of these beautiful medium-scale figures means that we could see even more variety in the new future. Dinosaurs from Jurassic World Evolution like the Giganotosaurus or the Majungasaurus would sit right at home within this toyline, so we will have to wait and see what the future holds through 2020 and beyond.

For now, however, we hope you’ve enjoyed this sneak peek at a little of what’s to come! Remember to stay tuned right here on Collect Jurassic, as we will be sure to update you with more news as soon as we get it!