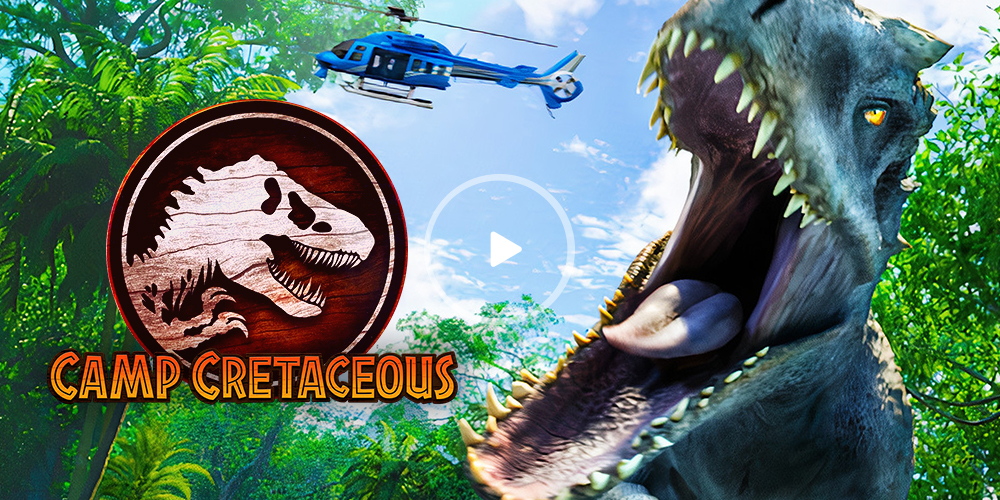 A remote, tropical island full of mystery. The sudden awe of witnessing living, breathing prehistoric creatures roaming within it’s lush landscape. That innocent wonder giving way to to overwhelming terror, as an unforgettable getaway turns into an all-out fight for survival. Jurassic Park’s recipe for the perfect summer blockbuster back in 1993 has weathered decades of sci-fi epics, super hero mash-ups, and even a soft reboot of itself (which of course spawned the Jurassic World trilogy). So when Universal and Dreamworks Animation set out to create the very first animated television series set in the Jurassic film franchise, it only makes sense they started with these foundational elements to tell an all-new story that pits man — well, child in this case — against dinosaurs once again.

Jurassic World Camp Cretaceous, premiering September 18th on Netflix, sees six teenagers invited to attend the eponymous camp just ahead of the events of 2015’s Jurassic World film. Over the course of the season’s eight 24-minute episodes, we see that classic Jurassic formula play out in way that feels instantly familiar yet refreshingly updated to suit a new audience of Jurassic fans. Before we dive further into our spoiler-free review, let’s spell out the obvious: yes, this is an animated show about “kids”. But as you’ll come to find out, the creator’s of Camp Cretaceous set out tp dispel any and all reservations one might have about crafting a story within these confines. The stakes are just as as high, and the park and its inhabitants are just as beautifully dangerous. 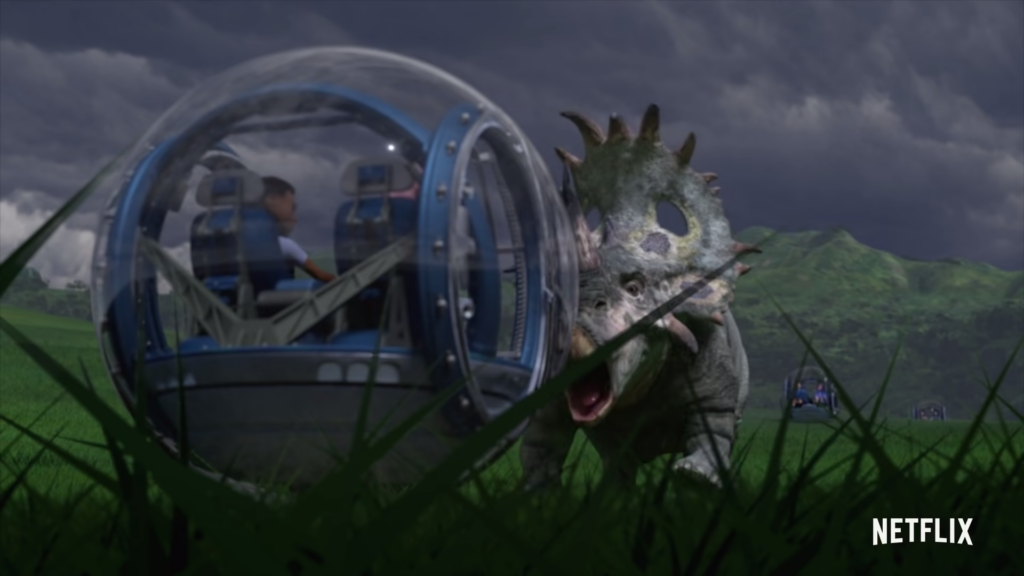 While the first few episodes of the show re-introduce viewers to the idea of an open, functioning theme park filled with to the brim with dinosaurs, they also take their time developing each of the series’ young cast of campers. We first meet Darius, the central character of Camp Cretaceous, to whom a visit to Jurassic World holds a much deeper meaning than another summer vacation. Without giving too much away, Darius’ backstory sets the tone almost instantly that the series won’t be pulling any emotional punches, despite the age group of its characters. Upon arrival on the island, we also meet Brooklyn (the seemingly vain social influencer), Ben (a somewhat high-maintenance nervous wreck), Yaz (an athlete and  determined introvert), Sammy (the overly-affable farm girl) and Kenji (the rich and self-appointed cool kid). Aside from their diverse personalties, they each have their own reasons for heading to Camp Cretaceous as well. And beginning with those reasons, we come to find out more about each character as the first couple episodes progress. Rounding out this crew of teenagers are adult camp counselors Roxie and Dave — both of who share a decent amount of screen time while acting as gatekeepers to Jurassic World for the small group of teens.

Of course, even with this adult supervision it doesn’t take long for some of the campers to find their way into dinosaur-related trouble. This is a Jurassic show, after all! But even before we’re faced with the proverbial dino danger, Camp Cretaceous offers up plenty of glorious herbivore-laden vistas to gape in astonishment over. Brachiosaurus, Parasaurolophus, Stegosaurs, Ankylosaurus, Sinoceratops — just to name a few — all show up soon enough and in perfect form. There’s no arguing that Jurassic Park and World are, at their heart, all about dinosaurs. Camp Cretaceous honors this simple truth by rendering these creatures in beautiful, life-like detail that compliments their film counterparts while balancing the more stylistic aesthetic of an animated show. One of the most exciting aspects of this series is getting to spend more time looking at these animals, and not one of the episodes in this season disappoints. 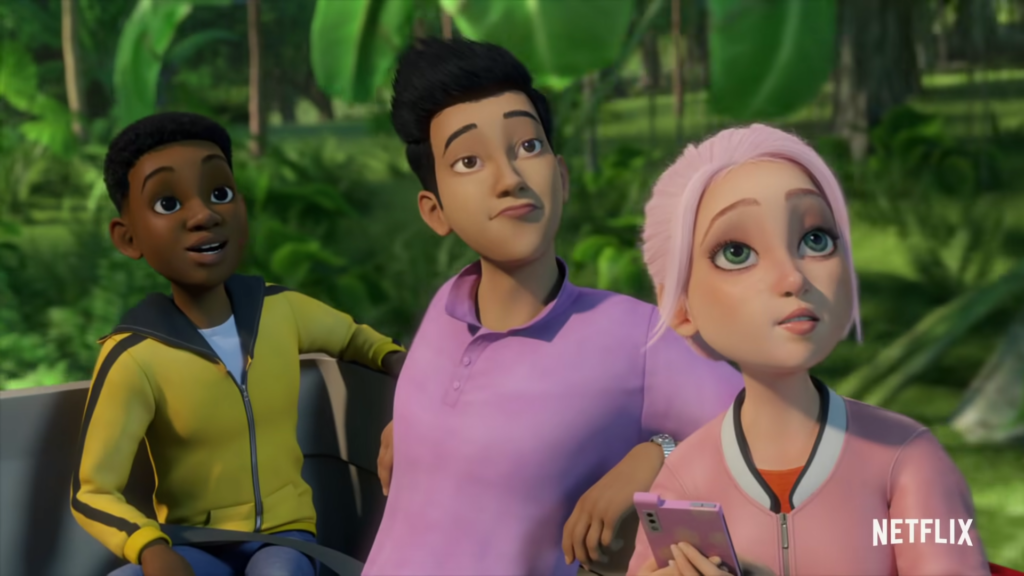 Aside from the gorgeously realized dinosaurs in Camp Cretaceous, the rest of show certainly aims for a higher visual standard than you’re used to seeing in an animated TV series. And while it often meets the expectations it sets for itself with it’s dense, leafy jungles and emotive human characters, there are moments where it falters. Particularly on the facial animations on some of its non-dinosaur subjects. What’s somewhat baffling is that this criticism isn’t consistent throughout the show: in an early episode Dave’s eyebrow movements look like something out of an animation student’s demo reel, only for a later scene in the series to show Brooklyn’s range of expression rivaling that of a Pixar character. What makes those visual low points stand out, even though they are few and far between, is the that high points are so breathtaking. Camp Cretaceous is often a feast for the eyes, and its clear that Dreamworks Animation wasn’t willing to compromise when it came to the dinosaurs and the environments around them. It just feels like a little bit of that polish could have occasionally benefited human characters in a handful of scenes. All the same: this first season still boasts the usual sky-high visual effects budget you would expect from the Jurassic franchise, the kind that always leave us extremely pleased with the end results.

Throughout it’s combined 192-minute runtime, the series takes its small cast of characters to countless expertly-crafted locales around Jurassic World. Most, if not all, major set pieces in the show will undoubtedly delight new and longtime fans of the series. Avoiding spoiler territory, let’s just say we were surprised at just how far behind the scenes the campers traveled even half-way through the season. We are of course treated to some familiar areas around the park as well, beings as the show eventually takes place almost concurrently with the 2015 movie. There’s some clever overlap with the film here and there, done in a way that further solidifies this story’s place in the Jurassic film universe. However, it is the truly new environments that make their mark in Camp Cretaceous. The camp itself — the unique architecture amongst a massive redwood-esque forest — is at once as iconic as the Visitor’s Center or Worker Village from the earlier films. Our teenage troop doesn’t stay put for long though, and fortunately for the audience journey from one new yet memorable Jurassic-themed backdrop to another. 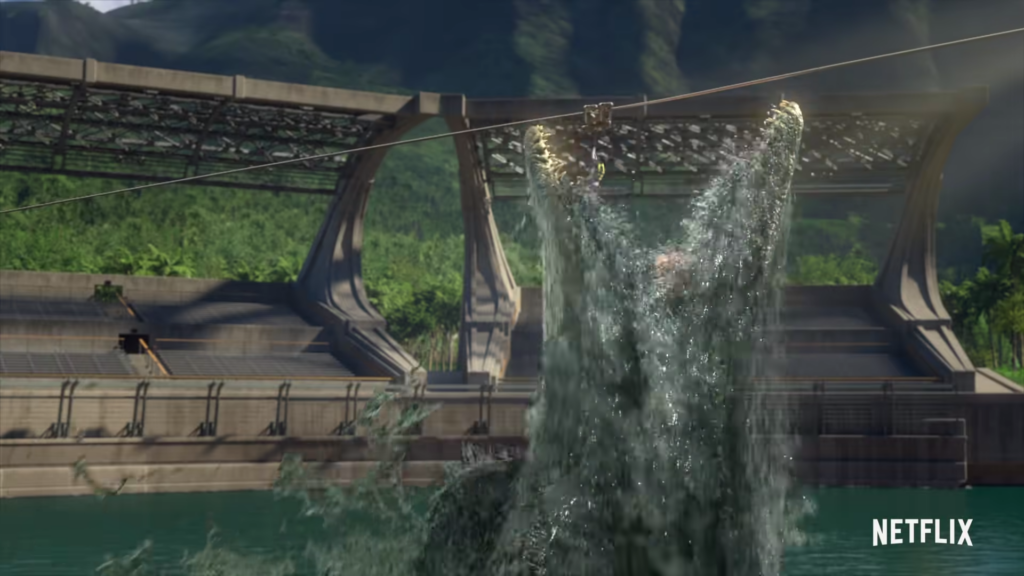 Darius and crew naturally do much more than physically move the story forward with each passing episode. We see each character struggle, grow and eventually thrive in the dire circumstances they find themselves in. Like any good Jurassic story, we’re first introduced to some relatively likable characters that, in a survival situation, blossom into the heroes they never knew they could be. Alan Grant and Claire Dearing would undoubtedly find themselves in good company not just with Darius, but with the rest of the gang as well. Enjoying these personal journeys is just as essential in Camp Cretaceous as it is in any of the films, as there is plenty of downtime between the action for dialogue and, in turn, character development. Thankfully, the series feels laser focused on this aspect even as Indominus Rex gleefully crashes through the scenery (as if on cue) whenever teenage bickering reaches its fever pitch.

Speaking of Indominus, it and its fellow carnivorous kin provide plenty of perilous situations for the campers. As stated earlier in the review, Camp Cretaceous doesn’t shy away from the real horrors of the Jurassic series. Buildings are destroyed, vehicles are crushed, and people are eaten. This is not a kiddie version of the franchise’s hallmark dino-induced terror, and it certainly isn’t intended for a very young audiences despite being animated. Carnotaurus, nicknamed “Toro” in an early episode, will quicken your pulse in almost every scene. And the aforementioned Indominus Rex is every bit as savagely violent here as it was in the film. Camp Cretaceous knows the importance of keeping viewers on the edge of their seats, and in later episodes is almost relentless in its pursuit to do so. Prepare for that familiar dread, just when you think our campers have finally found safety by outrunning or outsmarting another hungry dinosaur. Just as it should be. 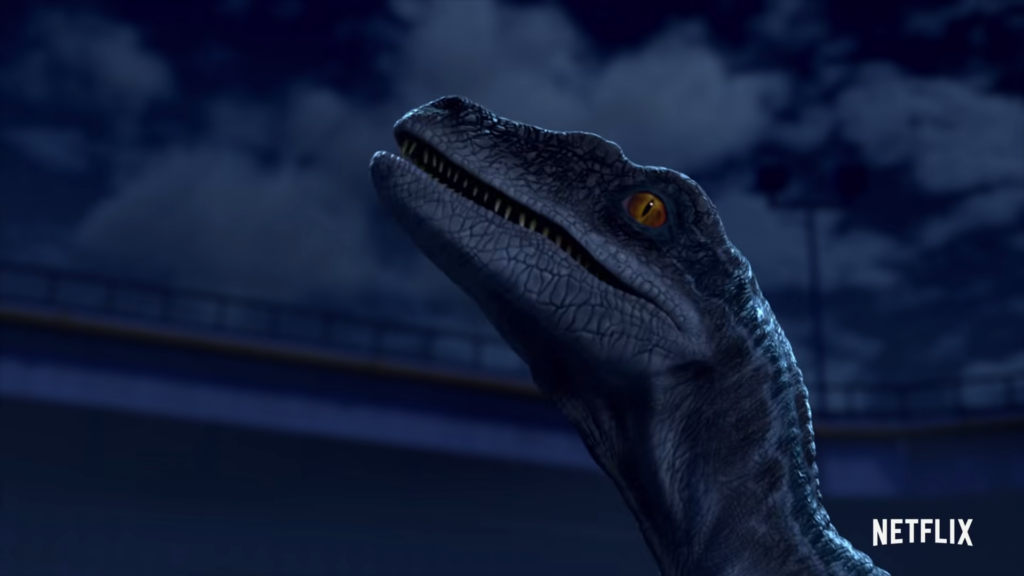 Set in between each terrifying encounter are just as many tender moments between the central characters and the more docile dinos found throughout Jurassic World. And ay review of Camp Cretaceous wouldn’t be complete without mention of Bumpy. The aptly named baby Ankylosaurus has already made quite a name for itself amongst Jurassic fans young and old — without anyone even needing to see the show. Thanks for early merchandise and marketing, the roly-poly herbivore has become an instant favorite ahead of her official debut in this first season. But does Bumpy have what it takes to become the Baby Yoda/The Child of the Jurassic franchise? It may be too soon to tell, but the time we do spend with her in the show is filled with enough adorable antics and mannerisms to give the Mandolorian’s sidekick some cute competition.

As a life-long Jurassic fan, the idea of an animated series set in the same world created by the films is somewhat of a lifelong dream. A dream that has now come true with the arrival of Jurassic World Camp Cretaceous. We as fans approach every new project with an almost contradicting bias of wanting to both love it and hate it based off a variety of assumptions. With this show, many have their expectations set based on the fact that it’s animated verses live action, or that its about a new group of teenage characters verses the usual familiar adult faces. Seeing the entire season of Camp Cretaceous, it’s clear to me now that those creative choices are intrinsic to what makes the show so successful. Jurassic Park, its original sequels, the new Jurassic World films — all of these act as pillars to the franchise and its fandom. To erect an all-new pillar alongside them without releasing an actual film is a tall order. And yet, Camp Cretaceous’s first season is well on its way to doing just that. It has captured the excitement and thrill of Jurassic across 8 episodes in a way that throughly impressed this dinosaur theme park enthusiast. But more importantly: it will ignite the imaginations of a new generation of fans for years to come. Can’t wait to see what comes next. 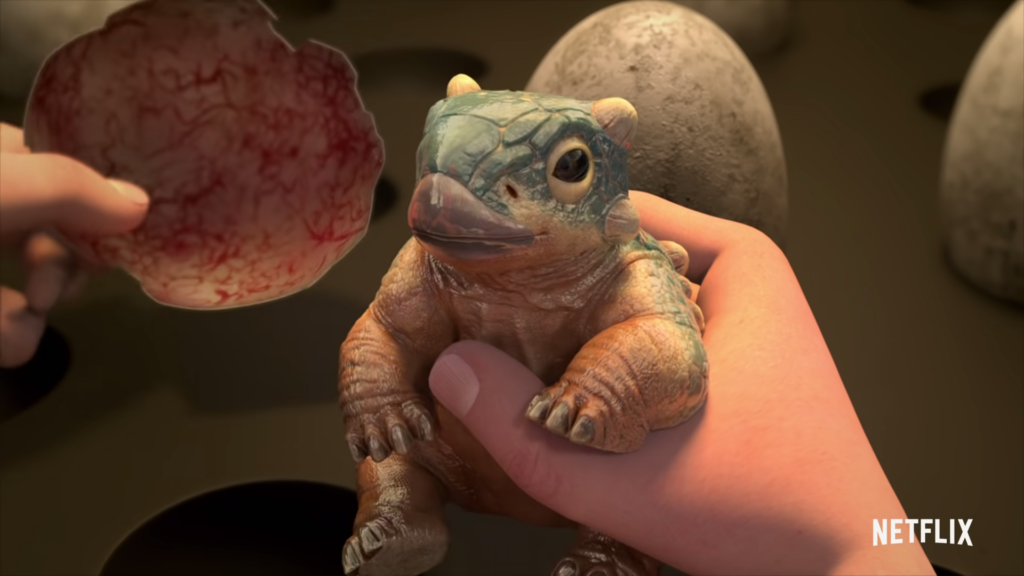 Thank you for tuning into this spoiler-free review, and of course you can check Jurassic World Camp Cretaceous for yourself when it premieres in September 18th, only on Netflix.