When the Jurassic World Live Tour was first announced earlier this year, fans everywhere rejoiced at the fact that yet another exciting Jurassic experience was on the way. Of course, our first reaction here at Collect Jurassic was, “Hopefully there’ll be merchandise, too!”. Visions of Live Tour-exclusive toys and collectibles filled out imagination, but could anything live up to those expectations? Now that the show has officially debuted we can enthusiastically answer “Yes!” to that question. We finally had a chance to attend the Jurassic World Live Tour for ourselves this past weekend during its World Premiere in Chicago, and our expectations for what we hoped to see there were completely blown away.

First off, we don’t intend to provide any kind of in-depth review of the show itself here on Collect Jurassic⁠—please see the wonderful review by the Jurassic Park Podcast if you’d like to know more in that regard. We can only confirm that the show is an absolute blast for Jurassic fans of any age, and the way it connects to the larger film universe as a whole is well thought out and executed in a way that still makes for a great arena show. The dinosaurs themselves were as breathtaking as one can imagine, especially the almighty T-Rex. But enough about the show, let’s head to the merch booth! 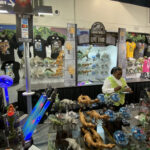 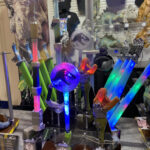 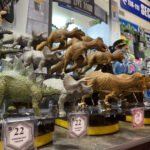 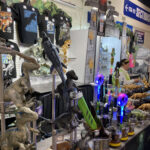 As shown in the photo gallery above, there was a lot up for sale at the various stands setup throughout the venue. They all essentially carried the same assortment of apparel, plushes, figures, light-up toys and more—and it was nearly overwhelming even for a seasoned Jurassic collector. So what did we come home with? Watch the video above for an in-depth showcase of the wide range of toys and collectibles offered exclusively at the Jurassic World Live Tour. Our 4K review will take you through an all-new Gyrosphere toy, dinosaur figures, snow-cone cups and more, all presented in ultra-high definition. Subscribe to our YouTube channel for more Jurassic collecting reviews and news updates, and let us know in the comments you favorite item in the video!